Worldwide delivery
We can supply to every country and city.
Product Quality Assurance
We give garanty for the lighting for 1 year.
Own production
We have our own factory. We are able to take into account all your concerns.
Promotions and bonuses
We offer good conditions to loyal clients. Good proposals for designers and lighting companies.
replica Taraxacum S1
Categories: CEILING LAMPS, FLOS style
DESCRIPTION

Spring’s first bloom, the dandelion, “simple and fresh and fair from winter’s close emerging” has inspired poets from Walt Whitman to Emily Dickinson. In 1960, this March flower inspired Achille Castiglioni, a Flos founder, to create a suspension light that shone “like guineas with the sun’s warm eye on.” He named it Taraxacum after the dandelion’s scientific name. In 1988, he re-invented it as the Taraxacum 88 Suspension Light. Between the contrasting shapes of sphere and triangle, the opposing textures of warm incandescent light and cool aluminum, this Suspension Light celebrates play. Direct light from 60 transparent globes is reflected by 20 pressed and polished aluminum triangles. The whole hangs from a steel ceiling fitting and rose. As John Clare says of dandelions, “We almost think they are gold as we pass.” 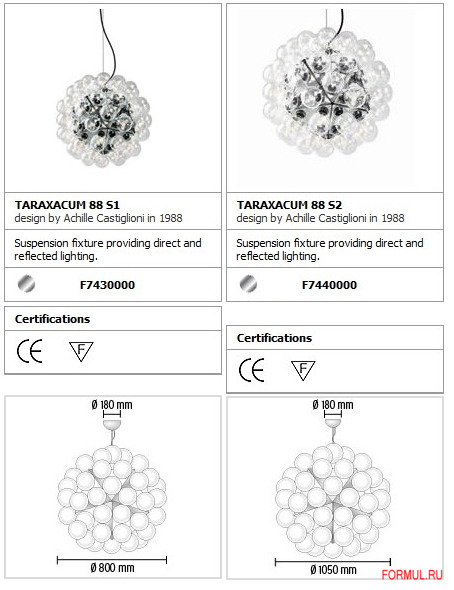 Enter your name and contact phone number. In the near future our manager will call you.